The bleak brilliance of Peanuts The bleak brilliance of Peanuts

The numbers are extraordinary. Charles M. Schulz, whose centenary falls next week, spent nearly fifty years of his life producing daily comic strips for Peanuts. Between October 2, 1950 and his death in February 2000, he drew a staggering 17,897 of them. He retired in December 1999 after a series of strokes and a cancer diagnosis; he died the day before his farewell strip was published.

It’s not just the longevity that is remarkable. At its peak, Schulz’s work had a daily global audience of some 355 million. More than 2,600 newspapers in seventy-five countries carried...

The numbers are extraordinary. Charles M. Schulz, whose centenary falls next week, spent nearly fifty years of his life producing daily comic strips for Peanuts. Between October 2, 1950 and his death in February 2000, he drew a staggering 17,897 of them. He retired in December 1999 after a series of strokes and a cancer diagnosis; he died the day before his farewell strip was published.

It’s not just the longevity that is remarkable. At its peak, Schulz’s work had a daily global audience of some 355 million. More than 2,600 newspapers in seventy-five countries carried his strip. Meanwhile, the licensing industry created around his characters was introducing 20,000 new product lines annually. The property as a whole was turning over $1.1 billion a year.

Conventional wisdom has always had it that this wholesale commercialization of Peanuts devalued and degraded the work itself. One of Schulz’s first big commercial coups was to license his characters to Ford in November 1959. Two months later the Newspaper Comics Council, a trade body, organized an event titled, “How Greedy Can You Get?”

Schulz responded to such attacks by arguing that his work was only a product to begin with. “How can they criticize a commercial enterprise for being commercial?” he said. “It’s just a plain old comic strip that helps to sell newspapers.” But to understand why people were so vehement in defense of Peanuts we have to look to the appeal of the strip in the first place.

When Peanuts launched in 1950 — in just seven newspapers — no one had much faith in Schulz’s creation. It was sold as a space-saver: four small panels, each about 40mm high — the size of an airmail stamp, Schulz later recalled bitterly: “I was forced to draw the world’s smallest comic strip.”

But Schulz turned the weaknesses into strengths and made aesthetic virtues of the restrictions he faced. “I had to fight back by using white space,” he said. He ruthlessly stripped away extraneous background detail. This included adults; his characters are de facto alone in the world. He also gave them outsize heads to make their faces more expressive. He eschewed fancy camera angles, and always drew from the same perspective — his characters’ eye level.

He accompanied this visual austerity with a distinctive emotional aesthetic — acerbic, bleak, cruel — which was new, not just to the world of the comic strip but to mainstream American culture tout court. “Nobody was saying this stuff,” the satirist Jules Feiffer said. “You didn’t find it in the New Yorker. You found it in cellar clubs, and, on occasion, in the pages of the Village Voice. But not many other places. And then, with Peanuts, there it was on the comics page, and it was the truth.” The work invited readers into its white spaces where they found an emotional immediacy that was uniquely modern and raw — it was “the first mainstream comic strip ever to regularize the use of the word ‘depressed’,” according to Schulz’s biographer David Michaelis.

Psychological acuity is embedded in the very structure of the strip. Typically, Schulz’s gags are three-frame ideas with the extra frame used either as a kind of comedy beat or as a means of adding emotional depth to the moment. In one December 1959 strip two early characters, Patty and Violet, are haranguing Charlie Brown. “Well, what are you doing here?” they begin. “Go on home! We don’t want you around here! Who asked you to come by in the first place? Nobody! Go on home!” In the third frame Charlie Brown walks away, crushed, his speech bubble a black, inarticulate mass of ink and misery.

When he has gone, Violet says: “You know, it’s a strange thing about Charlie Brown… You almost never see him laugh.” The strip would work with its three frames of dialogue. But that one wordless frame that contains Charlie Brown’s utter dejection – that allows us to feel the time it takes him to walk away and how he feels walking – intensifies the emotional reality of the scene and makes the punch of the punchline land with immeasurably greater force.

The primary comedy of Peanuts concerns humiliation, failure and rejection; love unrequited; happiness denied. Charlie Brown, perhaps the most defeated character in all literature, bears the brunt of most of this. But his despair is deepened by the quality of his hope. In one 1973 storyline he develops a rash on his head that makes him look like a baseball. He has to wear a bag over his head. At summer camp, he is a boy transfigured. As “Mr. Sack,” he becomes liked, admired and respected. For a moment he gets to see what life might be like if he wasn’t Charlie Brown. Then he recovers.

Snoopy, the strip’s other great comic archetype, is sometimes seen as Charlie Brown’s antithesis. As he became less dog-like over the years, some critics felt he distorted Peanuts, transforming it into a childish arena of narcissistic fantasy and wish fulfillment. As Daniel Mendelsohn wrote in 2006, this Snoopy — “the smugness, the avidity, the pomposity, the rank egotism” — represents the worst of us.

But the desperate exuberance of Snoopy’s urge to fantasize is entirely in character. His first recorded thought, in May 1952, is: “Why do I have to suffer such indignities?” In August 1955 he reflects: “I get so tired of just being a dog. What a miserable life.” He has always wanted to escape; being a dog is his tragedy. In March 1956, Charlie Brown lectures him, while Snoopy pretends to be an alligator: “Be happy with the things you have! Be happy with what you are!” But he can’t be. His retreat from reality is really a kind of resilient response to it. 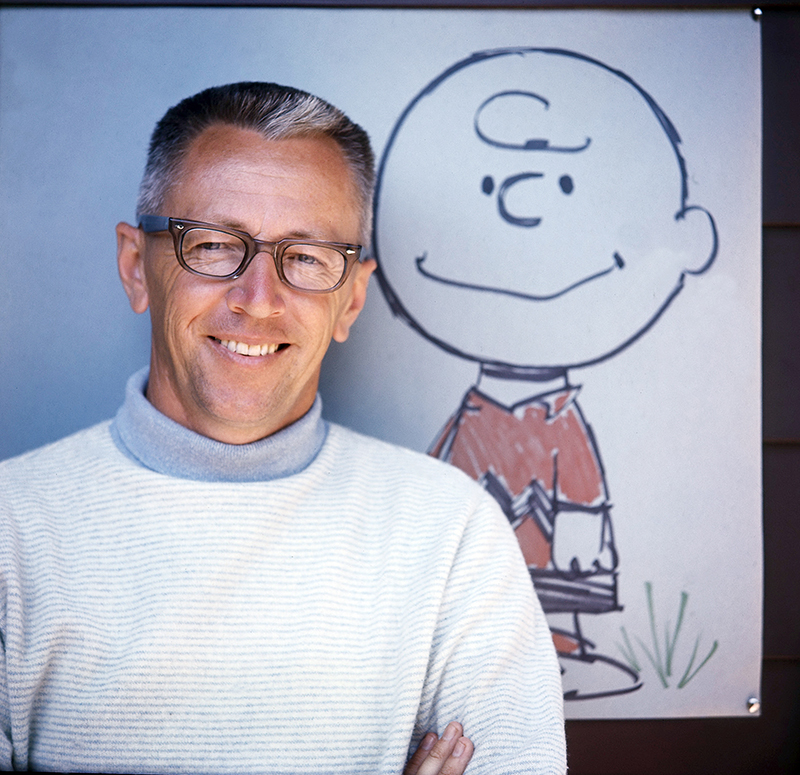 All the characters are trapped by their own inadequacies, condemned to play out the same roles in perpetuity. “What do you want to be when you grow up,” Violet asks Charlie Brown in 1954. “You mean I got a choice?” he replies. When Charlie Brown comes to kick the ball that Lucy is holding for him in 1970 — one of the strip’s defining running gags — he quotes Isaiah: “How long, O Lord.” In the last frame Lucy looks down on him desolate at her feet. “How long? All your life, Charlie Brown. All your life.”

Schulz insisted his work was disposable. “Comic strips… never will be art. They are too transient,” he said. “They are made to be funny today in the paper, thrown away.” But it’s easier to see now it’s finished how powerful the ephemerality of Peanuts really is. Something new each morning but not made to last the day more nearly approximates to our experience of life, its routines and rituals, than any other art form I can think of. A format that insists on its own triviality in fact confers weight and meaning through sheer repetition. Those prodigious numbers, those 17,897 drawings, matter.

And the finality gives meaning too. To read Peanuts is to discover that a strip about the limitations of our lives becomes in death about how we contend with the limits of life itself. Which is to say, it is about how we live, one day to the next, one defeat to another, and how we find meaning in repetition, in obsession, in wrestling with the unreasonable facts of our own failures and rejections. Everything is sharper: the poignancies, the obduracy of the hope, the beautiful human absurdity of all that striving.

Right back at the beginning, in the fall of 1952, Schroeder, a boy forced to pour out his furious love for Beethoven on a toy piano, is frustrated by the philistinism of the characters he’s trapped with. “Sometimes I think I should put in for a transfer to a new comic strip,” he says. But of course, he can’t. Like all of us, he’s trapped in the life he was born with. Unlike us, he might live for ever.

The exhibition Spark of Schulz: A Centennial Celebration is at the Charles M. Schulz Museum, California, until March 12, 2023. The book Charles M. Schulz: The Art and Life of the Peanuts Creator in 100 Objects is out now. This article was originally published in The Spectator’s UK magazine. Subscribe to the World edition here.