Last month, he said that Putin had sent him twenty bottles of vodka for his birthday and ‘a very sweet letter’ Ravenna, Italy
Silvio Berlusconi believes that he alone can entice his old friend Vladimir Putin to the negotiating table and intends to give it a go before Christmas. The eighty-six-year-old media tycoon and former Italian prime minister wants a peace deal, mediated by him, to be his political swansong. His private jet is already on standby.

Internationally, the timing could not be better. Russia has suffered another military humiliation by abandoning the key city of Kherson and the Biden administration is reportedly telling Volodymyr Zelensky to think seriously about peace. Vittorio Sgarbi, Berlusconi’s confidant and now undersecretary...

Silvio Berlusconi believes that he alone can entice his old friend Vladimir Putin to the negotiating table and intends to give it a go before Christmas. The eighty-six-year-old media tycoon and former Italian prime minister wants a peace deal, mediated by him, to be his political swansong. His private jet is already on standby.

Internationally, the timing could not be better. Russia has suffered another military humiliation by abandoning the key city of Kherson and the Biden administration is reportedly telling Volodymyr Zelensky to think seriously about peace. Vittorio Sgarbi, Berlusconi’s confidant and now undersecretary for culture in Giorgia Meloni’s new government, has told me that Berlusconi thinks of himself as the only possible broker.

“Berlusconi loves the beau geste,” he said. “And this is the gesture he has in mind. He believes that he can pull it off, and if he does, without undermining NATO’s position, he will enter the history books as a global hero.”

Last month, Berlusconi’s Forza Italia was part of the right-wing coalition that formed Italy’s new government led by Meloni, who robustly supports the Ukrainian cause. She is about to authorize the country’s sixth package of support and told a NATO summit last week that she fully defends the country’s right to “territorial integrity, sovereignty and freedom.”

The difficulty for her is that even though her party, Fratelli d’Italia, received more votes than any other at September’s general election, her Ukrainian policy is opposed by most Italians. Just 43 percent support Ukraine (one of the lowest levels in Europe) and fewer still want to arm it. Only 42 percent agree with the EU’s sanctions on Russia and only a quarter think NATO should continue to send arms.

Most Italians want Zelensky to agree a compromise with Putin. At the start of this month there was a demonstration to this effect in Rome — 100,000 protesters according to organizers; 40,000 according to police — larger than any of the anti-Covid rallies. It was Europe’s first major protest against the Ukraine war. A Berlusconi peace mission could, therefore, be popular. But could it happen?

That such a surreally divisive figure should be allowed anywhere near such a peace mission might seem absurd. Globally, he is best known for his “bunga bunga” parties — attended by gangs of beautiful young women — during his last premiership, which ended in disgrace in 2011. His face these days looks like that of a waxwork dummy and he has difficulty walking. But he has lost none of his ability to cause controversy and is as crazily unpredictable as ever.

Berlusconi has played the role of mediator in talks between the West and Russia before — most notably at the 2002 Rome summit, which established a permanent NATO-Russia council.

What Putin loves about Berlusconi, it is said, is his insistence on striking up a friendship with someone before getting down to business. The pair first met at the G8 meeting in Genoa in 2001 and got on like a house on fire. Putin then stayed several times at Berlusconi’s summer palace in Sardinia and in 2015 Berlusconi was Putin’s guest in the Crimea, just a year after its annexation by Russia. On that occasion, the owners of a vineyard organized a tasting in his honor at which they opened a 240-year-old bottle of sherry (1775 Jerez de la Frontera, worth $120,000), to the fury of Ukrainians. 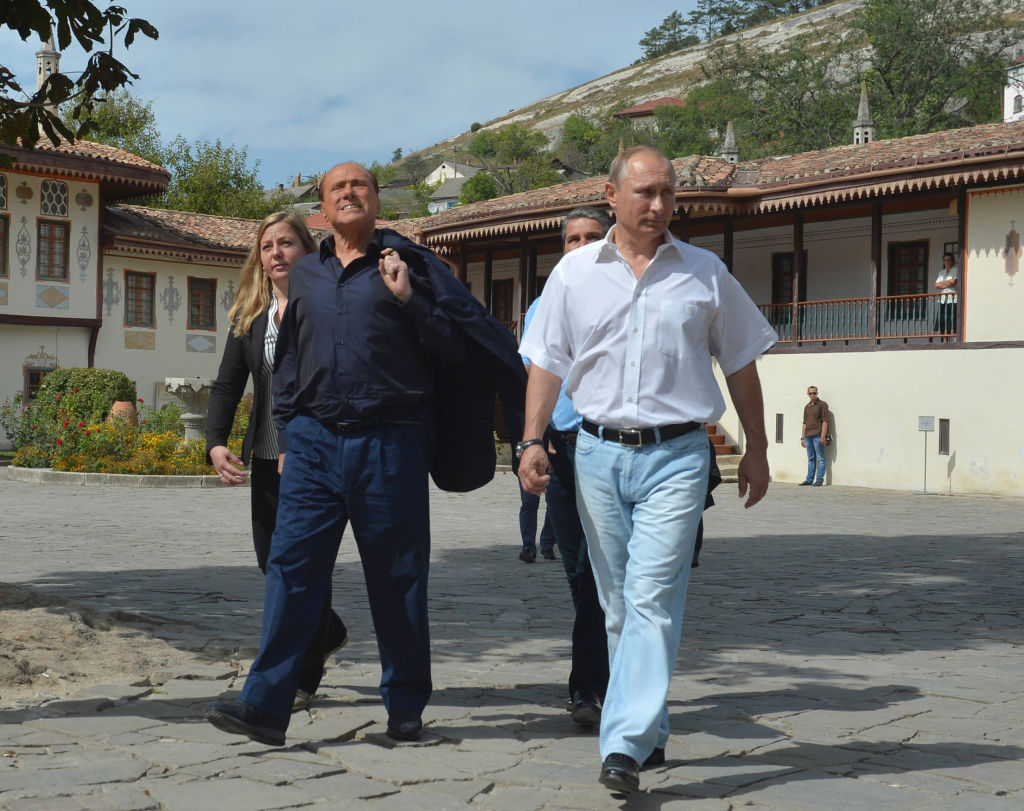 Since February, Berlusconi has at times seemed personally offended by the Ukraine invasion, complaining he feels “profoundly let down and aggrieved” by Putin. He said he tried phoning him twice, but could not get through. Subsequently, his party has voted in favor of sending arms to Ukraine and imposing sanctions on Russia.

Meloni’s party has tried to play down Berlusconi’s past closeness with the Russian president. He “had relations with Putin to try to bring him closer to western democracies,”  a Fratelli d’Italia MP said. “But that historical phase ended when Putin decided to invade Ukraine. Now the gap is unbridgeable.”

It seems that Berlusconi doesn’t agree. Last month, in a private talk to Forza Italia MPs, he said he and Putin had rekindled their friendship when Putin sent him twenty bottles of vodka for his eighty-sixth birthday — four days after the general election — with “a very sweet letter.” He claimed Putin said in the letter that he had only five real friends and Berlusconi was the first of them. He told his MPs that Putin was obliged to mount a “special military operation” to install a government “chosen by the Ukrainian minority of good and common sense people.” 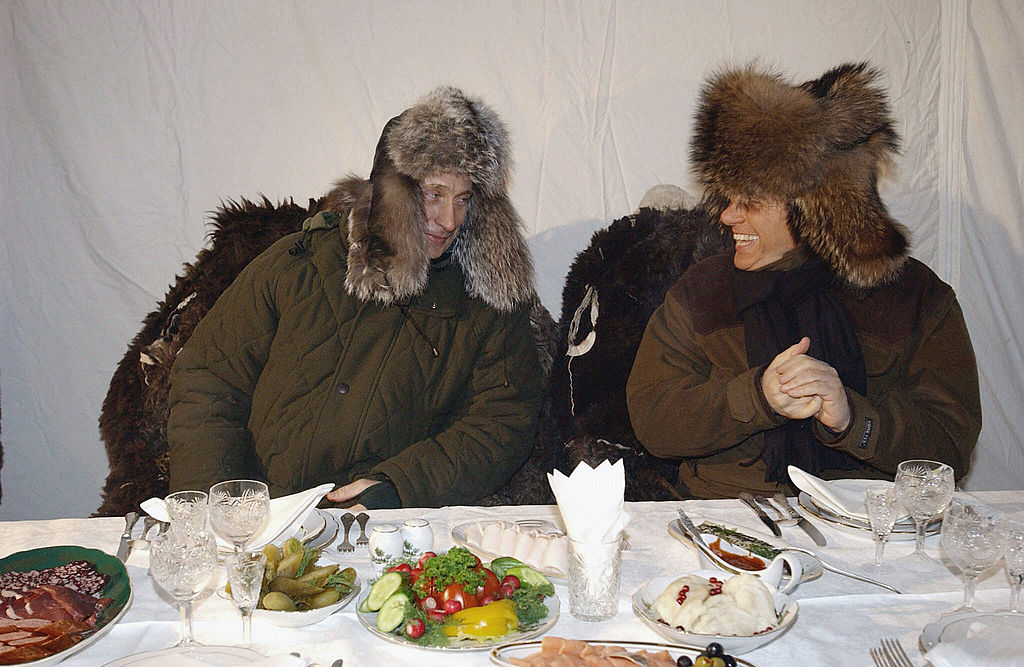 Silvio Berlusconi and Vladimir Putin as they prepare to have an informal dinner in a wildlife preserve some 120 km northwest of Moscow, February 3, 2003 (Getty)

“I cannot express my opinion or it gets leaked to the press and would be a disaster,” he added. A tape of the talk was promptly leaked to the press. Meloni responded by saying that there is no place in her government for anyone backing Russia.

Before she became prime minister, Meloni said her coalition needed a “clear, unequivocal foreign policy line.” But Italy is divided on Ukraine. Opposition to NATO and EU policy comes from parts of both the left and the right, thanks to the traditional strength of communism and Catholicism. During the Cold War, Italy had the largest communist party in Europe outside the Soviet bloc, and the modern Italian left still considers America the true enemy. Sooner or later, these tensions within Meloni’s coalition, and between Meloni and Italian public opinion, will severely test her government, and may test the unity of Nato too. Italy, once again, is Europe’s Achilles’ heel.