The chief power of nukes is in the dread they inspire, not their absolute destructive potential In 1861 an American seed-drill designer named Richard Jordan Gatling created a super-weapon that he believed would bring an end to war. With his hand-cranked, ten-barrel machine-gun, Gatling did for warfare what his contemporary Isaac Singer had done for sewing, bringing mechanization to a former handcraft. Gatling’s gun fired more than 200 rounds a minute — as much as an entire battalion of soldiers with muzzle-loading muskets. In his memoirs, Gatling wrote that "if a four-man machine-gun crew could kill a thousand infantrymen in five minutes" then perhaps the terror created by such a weapon...

In 1861 an American seed-drill designer named Richard Jordan Gatling created a super-weapon that he believed would bring an end to war. With his hand-cranked, ten-barrel machine-gun, Gatling did for warfare what his contemporary Isaac Singer had done for sewing, bringing mechanization to a former handcraft. Gatling’s gun fired more than 200 rounds a minute — as much as an entire battalion of soldiers with muzzle-loading muskets. In his memoirs, Gatling wrote that “if a four-man machine-gun crew could kill a thousand infantrymen in five minutes” then perhaps the terror created by such a weapon would “discourage war altogether.” 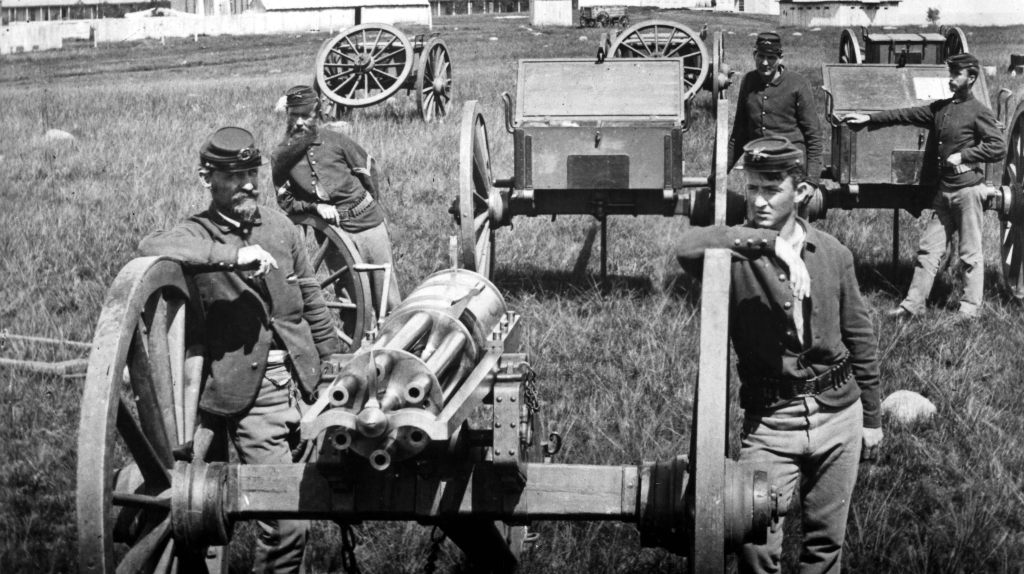 Robert Oppenheimer, the creator of the first atom bomb, was motivated by a similar thought. “The atomic bomb has made the prospect of future war unendurable,” wrote Oppenheimer. “It has led us up those last few steps to the mountain pass and beyond there is a different country.” Yet like Gatling, Oppenheimer was wrong. Gatling’s machine-gun multiplied the power of a musket by a factor of hundred. Oppenheimer’s bomb had the explosive power of 20,000 tons of TNT — multiplying the conventional munitions carried by a single B-29 bomber by a factor of a thousand. But the atom bomb had not brought humanity into a “different country.” To generals in Moscow and Washington, it was just a bigger bomb.

By 1950 military planners in both new superpowers were scheming to use nuclear weapons on the battlefield. General Douglas MacArthur — the conqueror of Japan — tried to persuade President Harry S. Truman to drop an atom bomb on North Korea. And in Moscow, Marshal Georgy Zhukov — victor of the battles of Kursk and Berlin — urged Joseph Stalin to develop a new military doctrine where tactical nukes were used in conjunction with ground forces. Stalin, rightly suspicious that America’s technological superiority would give them a natural advantage in a nuclear arms race, resisted.

But in September 1954, eighteen months after Stalin’s death, Zhukov finally got his wish. A forty kiloton bomb known as RDS-4 — twice as large as the Hiroshima device — was detonated over the remote steppe near Totskoye in the southern Urals. Eight miles from ground zero, 45,000 Soviet troops, plus about 1,200 tanks and armored personnel carriers, waited in battle order. The men had not been issued with any protective gear. Five minutes after the detonation, fighter-bombers were sent over the blast site to drop conventional bombs. Three hours later the tanks were sent in, followed by the infantry. Zhukov observed from an underground nuclear bunker. Superficial medical examinations of the troops showed that marching into nuclear fallout was not immediately lethal, which was good enough for the Soviet commander. No systematic record was ever kept of the radiation poisoning and cancers that would later have affected the men.

With the Soviets’ Totskoye experiment, the potential battlefield use of nuclear weapons had become a tried-and-tested reality. In the years that followed, both superpowers developed smaller and smaller nuclear devices, including land mines, torpedoes, depth charges and artillery shells. The smallest nuke ever developed was the US’s 1963 W-48, designed to fit into a NATO-standard 155mm artillery shell. This bomb — no larger than a party-sized bottle of cola — had a yield of “only” 0.07 kilotons, or seventy tons of TNT.

But Gatling and Oppenheimer’s idea of a weapon that would make the prospect of future war “unendurable” persisted. With the advent of the thermonuclear (or hydrogen) bomb, the engineers of Los Alamos and Arzamas-16 could create weapons thousands of times more powerful than the Hiroshima device. “A thermonuclear war cannot be considered a continuation of politics by other means,” wrote the future Nobel Peace Prize-winning nuclear weapons designer Andrei Sakharov in his memoirs. “It would be a means of universal suicide.”

In 1961 Sakharov built RDS-220, a double-chambered thermonuclear device whose casing (known as a tamper) was cast of twenty-six tons of pure uranium metal. Ten days before RDS-220 was meant to be detonated, Sakharov received calculations that suggested that his device could set the Earth’s atmosphere on fire, so he scrapped the uranium tamper and recast it in lead to reduce the bomb’s power. Nonetheless, when RDS-220 was dropped by parachute over a test site at Novaya Zemlya in the Soviet Arctic on October 30, 1961, the detonation blew out windows 560 miles away in Finland. Sensors placed ninety mieles from ground zero showed that the blast was still hot enough to cause third-degree burns, and a shock wave measuring 5.5 on the Richter scale traveled three times around the Earth’s crust. The blast had occurred at a height of 13,000 feet, but a circle of rock and sand several miles in circumference had been turned into a crater of black glass. At fifty-two megatons, RDS-220’s power equalled more than 2,500 Hiroshimas.

American journalists glibly called Sakharov’s device the Czar Bomb, to match the Kremlin’s Czar Cannon and Czar Bell. But it was clear to leaders in both Washington and Moscow that a dangerous threshold had been crossed. Mankind had achieved the final, fatal multiplication of his destructive potential. The annihilation of life on the planet was now within his power. In the aftermath of the Czar Bomb, both sides agreed to ban atmospheric nuclear testing for ever (though underground tests continued). And the principle of mutually assured destruction, or MAD, was born. Global thermonuclear war had indeed become unthinkable because it had become unwinnable.

Or had it? The Americans and the Soviets both continued to develop and deploy so-called “limited yield” or “nonstrategic” nuclear weapons to their frontline forces. Indeed, it was a Soviet nuclear-armed torpedo, not a strategic nuke, that brought the world the closest it has ever been to a full-scale nuclear war during the Cuban Missile Crisis of 1962. A fleet of four Soviet Project 641 diesel-electric submarines had been despatched from the Soviet naval base at Severomorsk, near Murmansk, with orders to sail to Mariel, Cuba. Each was armed with twenty-one conventional T-5 torpedoes — and a single nuclear-tipped one containing an RDS-9 nuclear warhead with a five kiloton yield. Uniquely in the history of warfare, each sub’s commander was authorized to use his nuclear torpedo without consulting Moscow if the submarine “came under direct attack.”

On October 27, 1962, at the tensest moment of the standoff between John F. Kennedy and Nikita Khrushchev, the Soviet submarine B-59 was intercepted off the east coast of Cuba by US sub-hunting destroyers. The US Navy began dropping practice depth charges armed with detonators but no explosives in an attempt to signal the sub to surface. Out of radio contact with the USSR for days, the Soviet commander Valentin Savitsky assumed both that war had begun and that his ship was under attack. Savitsky gave orders for the nuclear torpedo to be armed and aimed at the aircraft carrier USS Randolph, some six miles away. His political officer Ivan Maslennikov, who held the second half of the nuclear key required to arm the warhead, concurred.

Luckily for the world, a third officer was on board equal in rank but senior in authority to Savitsky — flotilla chief of staff Captain First Class Vasily Arkhipov. After a stand-up argument in the cramped control room of B-59, Arkhipov overruled Savitsky and surfaced the submarine. Arkhipov quite literally saved the world from nuclear war — though on his return he was censured for cowardice. The story of the confrontation aboard B-59 was kept secret until the 1990s. 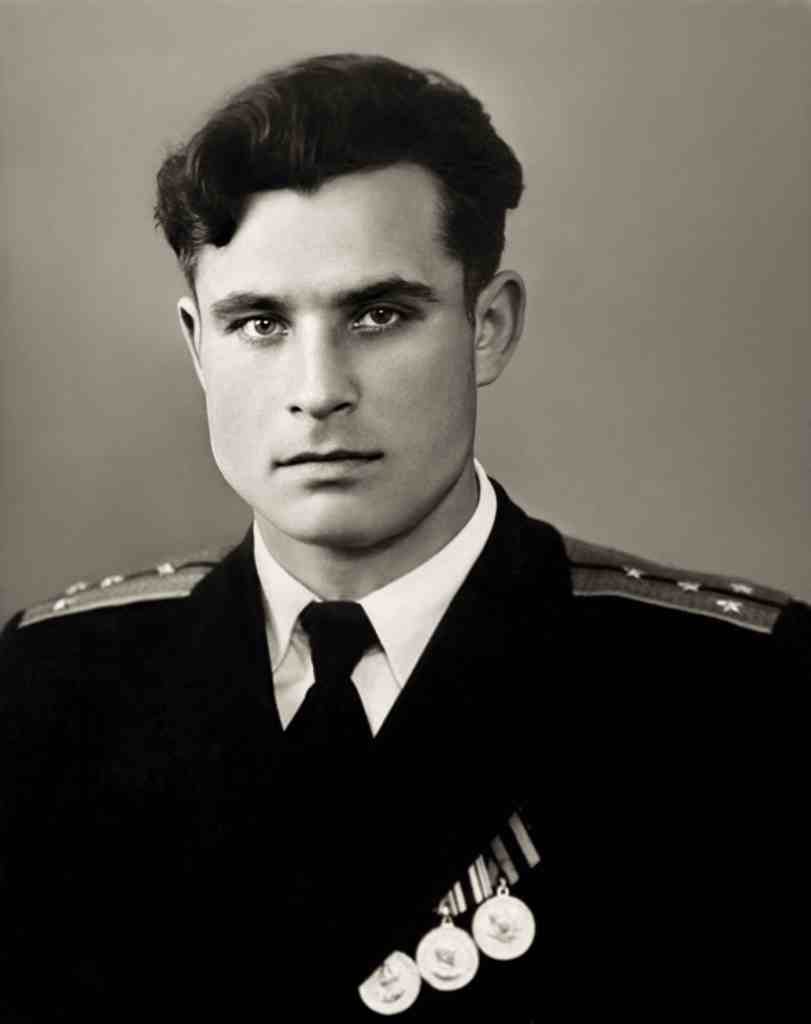 What the B-59 story clearly showed was that the idea that a nuclear weapon can really be “tactical” is a highly qualified concept. The risk of automatic escalation depends on the target. Had Savitsky nuked the American aircraft carrier Randolph, there’s little doubt that Kennedy would have answered with a larger nuclear strike against the USSR. If he’d detonated his nuclear torpedo in the open sea, maybe not.

Which brings us to Vladimir Putin and his threats that he was “not bluffing” about the use of nuclear weapons to defend Russia — including, implicitly, the newly annexed territories of Ukraine. Two US officials told CBS News that senior Russian military leaders discussed last month how and when they might use nuclear weapons on the battlefield in Ukraine. This week it was revealed that US national security advisor Jake Sullivan had held confidential talks with Nikolai Patrushev — head of Russia’s Security Council and the second most powerful man in the Kremlin — over Russia’s nuclear threats.

Ever since nukes were first used in anger in 1945, their chief power has been in the dread they inspire, not their absolute destructive potential. In one sense, then, the mystical power of the nuclear weapon that Oppenheimer spoke of when he quoted the Bhagavad Gita after the first Trinity test — “Now I am become death, the destroyer of worlds” — still remains in the form of a profound and persistent taboo on their use. Putin has broken that taboo in word, even if he remains unlikely to do so in deed (he has emphasised that Russia’s nuclear doctrine only allows the “defensive” use of nuclear arms).

But even though tactical nuclear war is no longer unthinkable, it’s important that such a war should remain unwinnable. The US and Europe’s nuclear powers have made it clear that their response to a Russian atomic strike on Ukraine will not be nuclear but will be “overwhelming,” in the words of the US secretary of state Antony Blinken. Total strategic nuclear war remains, as Sakharov predicted, a form of collective suicide. But it’s vital for the world’s security that tactical nuclear war be proved to be equally suicidal — for the aggressor.