You did it Joe! Plus: the latest on abortion and more

There’s no going back after Dobbs

“Consensus” isn’t a word that tends to be associated with the abortion debate. But after the Supreme Court heard oral arguments in the case of Dobbs v. Jackson Women’s Health Organization this week, the most direct challenge to the law on abortion in a generation, plenty of people on both sides of the issue seem to think that Roe v. Wade is on the chopping block.

I’ll leave such speculation to others, including my Spectator colleagues who discuss the case in the latest episode of The District.

What is clear is that if the court chooses to tackle Roe head on, the political consequences would be significant and unpredictable. A decision will likely come next summer, and it could scramble assumptions about the midterms. Under this hypothetical, states would go in their own, very divergent directions on abortion: full-scale bans in some places, very few restrictions in others. This polarized legislative patchwork would be a far cry from the safe, legal and rare formulation that Clinton alighted on a generation ago. And it would likely be at odds with the majority of American voters. Polls find that most voters support a legal right to an abortion as established in Roe. There are also clear majorities in favor of a number of significant restrictions.

A Kaiser Family Foundation poll finds that just 11 percent of Americans think abortion should be illegal in all cases, that two thirds of voters support the requirement of a twenty-four-hour wait between meeting a healthcare provider and getting an abortion, and that 57 percent of voters think doctors should show and describe ultrasound images to women seeking an abortion.

One of the difficult-to-answer questions about a possible post-Roe America, where abortion rules are set by legislatures not courts, is whether the moderate middle would win out, or whether those at either end of the spectrum in this debate, for whom it is a much bigger issue, would control the issue.

But it would be wrong to say that Dobbs will only be remembered as a politically significant case if the court chooses to overturn Roe. In fact, it is hard to construct a scenario in which the court’s ruling isn’t a very important moment. As well as the obviously seismic consequences of the most dramatic option, there’s the possibility of an only limited change to the court’s approach to abortion (or the remote possibility that the court could simply reaffirm the law as it stands). That would trigger a huge fight on the right. If a 6-3 court cannot find in their favor, pro-life activists will feel cheated by half a century of conservative judicial thinking.

And so while the future of Roe is far from clear, it is obvious that the status quo is not on the menu. Whatever the justices decide in Dobbs, America’s abortion debate is about to enter a new phase, one that could see the issue’s return to the political frontlines. The only question is which side feels the most aggrieved.

The New York Times magazine’s Mark Leibovich profiled foreign policy golden boy-turned-architect of Afghan misery Jake Sullivan this week. Leibovich didn’t get to talk to the national security advisor for the story but nonetheless unearthed some interesting — and rather strange — details about the foreign policy wunderkind that Hillary Clinton has called a “potential future president.” Leibovich reports that Sullivan wasn’t reluctantly prosecuting his boss’s wishes in managing the withdrawal from Afghanistan, but was himself a supporter of a speedy departure. Among the less serious tidbits: Sullivan survived on just two hours’ sleep during the Afghanistan crisis; he enjoys curling and…competitive speed walking.

Biden is flunking the Uighur test

Why hasn’t the Uyghur Forced Labor Prevention Act reached Joe Biden’s desk yet? As I detailed yesterday, Marco Rubio’s attempts to squeeze the ban on imports from Xinjiang, which has received unanimous Senate support, into the National Defense Authorization Act were scuppered by Democrats on procedural grounds this week.

To zoom out from that narrow row over blue slips and Senate procedure, the more important question is why the measure has not received a vote in the House and made its way onto the books? If Democratic leadership supports the measure, as they say they do, why hasn’t it passed?

The Washington Post’s Josh Rogin reports that “Biden administration officials have been quietly telling lawmakers to slow down.” In October, deputy secretary of state Wendy R. Sherman called Senator Jeff Merkley, a Democrat from Oregon and a co-sponsor of the slave labor bill, to “make clear that the administration prefers a more targeted and deliberative approach to determining which goods are the products of forced labor.”  The Washington Free Beacon tells a similar story. Alana Goodman reports, via congressional sources, that Senate Democrats are blocking the legislation “in response to pressure from Biden administration officials who fear the bill would torpedo climate negotiations with the Chinese government.”

In public, the administration says it supports the bill. In private, it is trying to water it down. The question of how to respond to genocide and forced labor in Xinjiang is arguably the most morally urgent test of Biden’s approach to China. Until he signs some kind of anti-slavery legislation into law, it is a test he is failing.

Kirn vs Harper’s, round three

Earlier this week we reported on the scrap between conservative novelist Walter Kirn and Harper’s magazine playing out on the pages of the Wall Street Journal. Kirn alleged that Harper’s had scrapped his column because his political views were beyond the pale. Then, in a letter to the editor, Harper’s publisher John R. MacArthur claimed that Kirn had in fact lost the gig because he was too busy on a book and kept missing deadlines. Now, Kirn has written a letter of his own, disputing that version of events. Who to believe? And when will the he-said-he-said stop? 2020 had the Harper’s letter. 2021 has the Harper’s letters to the editor.

In case you hadn’t noticed, the president has fixed America’s inflation problems. Or that, at least is what a graph tweeted yesterday by the official the Democratic Congressional Campaign Committee purported to show. Alongside the caption, “Thanks, @JoeBiden,” the DCCC shared evidence of gas prices plummeting from their mid-November highs to an apparently more affordable level by the end of the month.

Look closer look at the Y axis, however, and you’ll see that it measures average gas prices in dollars per gallon to three decimal points. That stunning Biden-masterminded victory against soaring prices amounts to a fall from $3.40 to $3.38. Two cents saved. You did it, Joe! 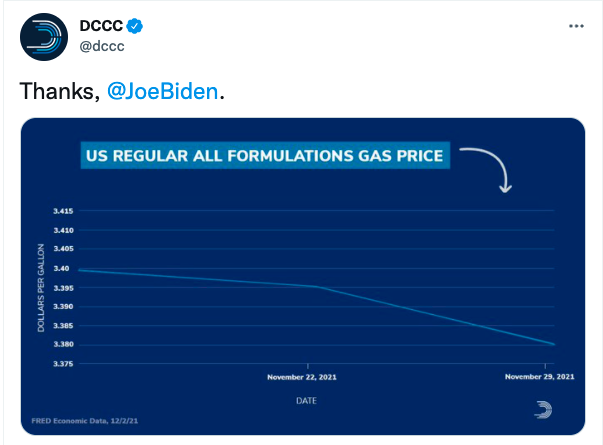 Oliver Wiseman is deputy editor of The Spectator World and author of the DC Diary, a daily email from Washington. He is a 2021-22 Robert Novak Journalism Fellow.

Mob rule, one year on

The demagogue went down to Georgia

Sloganeering on the world stage